We will draw animated characters. Because all characters are independent, they will all require a bottom-level acceleration structure. Each pixel will query two rays, one for the scene intersection and one for the shadow intersection. The resolution is 1600×900.

Acceleration structure builders have many configuration parameters, that’s why there is a lot of data in the tables. We will also split Vulkan and Direct3D12 results into different rows.

There are the results with 81 instances of the 52K triangle model. The overall number of animated vertices/triangles is 2.9M/4.2M. The number of joints is 4212:

Here is what we have:

Here are the videos of these two tests captured in BLAS update mode. Otherwise, the CS solution is faster than HW ray tracing.

How about 10000 BLAS instances? It will be 520K joints and 15M triangles. CPU cannot process half of million joints well. So we will stop the animation. Nvidia requires 1 GB BLAS buffer for all instances. The BLAS buffer for AMD is 2.3 GB, and the scratch buffer requires an additional 3 GB of memory. We are not counting pre-transformed vertices (600 MB in the case of 48 bytes per vertex). BLAS builder will work in the update mode. Nvidia 2080 Ti provides 43 FPS in 2K video mode due to underutilization, but the overall timing is already more than 10 ms, so it’s not better than 100 FPS. Radeon 6700 XT shows 49 FPS with 100% utilization.

Each animated, morphed, or deformed object requires memory for Vertex and BLAS data. Sometimes it can be a lot of data and a lot of memory bandwidth. And it affects performance. By contrast, rasterization doesn’t not require anything except original geometry and joint transformations. And all transformed data goes directly to the rasterizer. Tellusim engine is fully GPU-driven, including animation blend trees. The video with 10K animated characters is running with 135 FPS on Nvidia 2080 Ti. The performance on Radeon 6700 XT is more than 120 FPS. It works with 20 FPS and animation on mobile Apple M1. Each character has a unique animation and casts a global shadow as well. 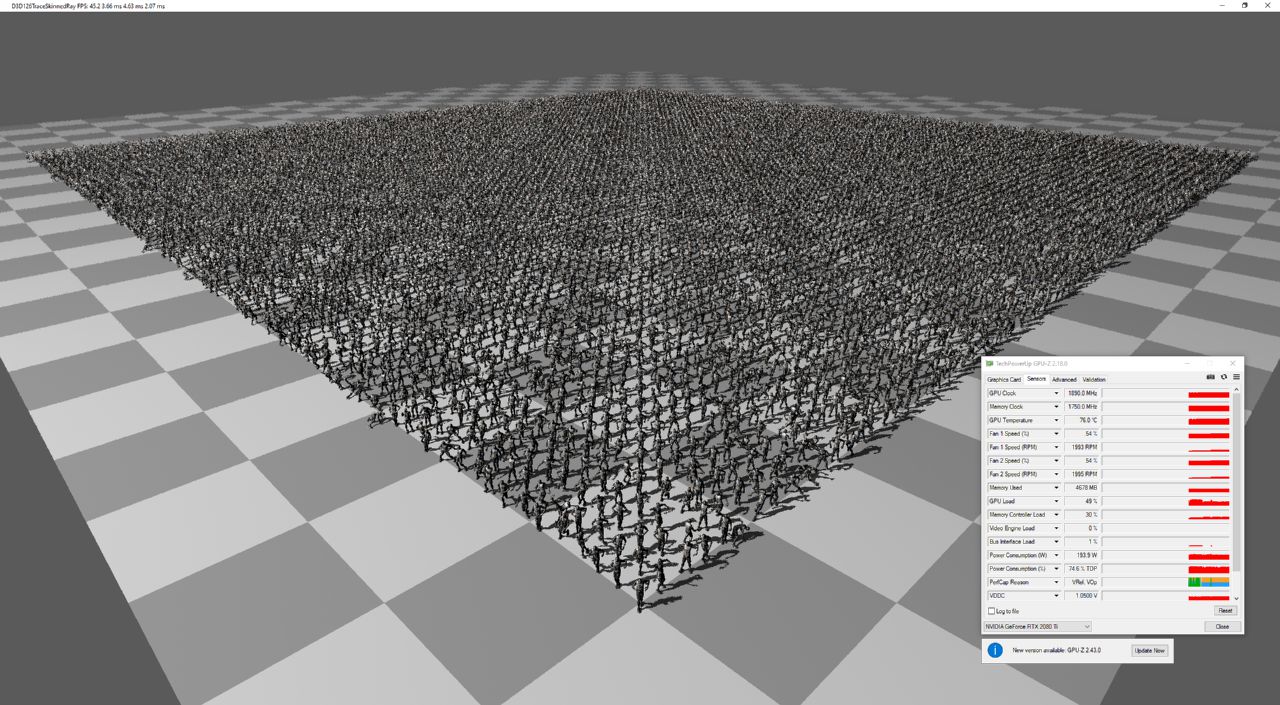 How to make 10K animated characters scene with Tellusim Engine:

That’s all that’s required. CPU only does some random number generation. Everything else is delegated to the GPU.